This paper examines the origin of what is today refer to as Nigerian modern drama has been traced to the numerous traditional festivals and ceremonies. These religious festival and ceremonies were presented through a traditionally established order of presentation which guaranteed their ultimate which makes –Diana – Devlin to define it as “periodic celebrations in which the whole community is involved”. This is what classifies Nigerian drama as a prototype of Greek theatre. Ogunbiyi observes that “the origin of Nigerian theatre and drama lie in her numerous traditional and functional to be found in every Nigeria society. Religious festival and ceremonies are part of the events that brings a community together. The heterogeneous nature of this aspect of a Nigeria man is so glaring that no community is devoid of one ritual ceremony, festival, ritual, or rite. Hence, Soyinka refers to these occasions as “one ARENA” one of the earliest that we know of in which man attempted to came to terms with the spatial phenomenon of his being. Also, Nwosu in his appraisal of African drama, attest to the fact that:

The African has a holistic minds that the playwrights understands the phenomenon in his environment as irreducible truths. Hence, the traditional theatre cannot be totally divorced from religious, cultural, economic, political, and agricultural activities ……. Hence, traditional Africa Theatre manifests in the seasonal festival, ritualist performances, mythologies, folklore, and fertility dances (for earth and man) that define the existential essence of the African.

Meanwhile, in this paper, most African nations can boast of being the custodians of many popular festivals, rites, and ceremonies that have now turned to tourist attractions for the outside world. As there are many gods or deities, tribes, and lineages, so also are different festivals and ceremonies to invoke, appease, placate, mark the migration of a lineage or celebrate the exemplary feast of deified personalities.

Join as Reviewer
Join as Editor 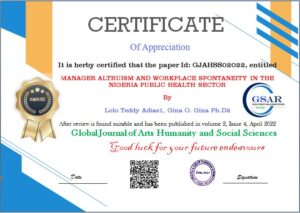 We handle everything for you!

This work is licensed under a Creative Commons Attribution-NonCommercial 4.0 International License.